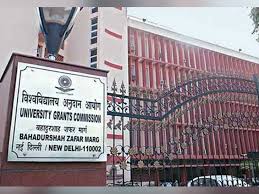 Out of 755 colleges across India, 366 colleges are wanting to lead the exam in August or September according to the reexamined rules gave by the UGC.
University Grant Commission needs to lead the final year exam of all students, however, a few Students and guardians have demand to go without doing the exam.

The 29th April examination direction for conclusive year understudy, had suggested that colleges oversee exam in disconnected or online organization, while it was suggested that first and second year understudies be advanced based on internal assessment and results in the past semester/year.

On this, UGC says that doing so will hurt the understudies in the future. Numerous petitions recorded in the Supreme Court for conclusive year tests not to be directed.

The Supreme Court, in this way, will hear the supplication next, against leading the final year exam UGC obligatory on
eighteenth August.

Aside from this, the UGC has clarified that if the issue is getting looked at in the SupremeCourt, it doesn’t imply that there will be no examination. The UGC has asked all the colleges and universities to lead the final year exam by 30 September.
Of the 755 colleges across India, 366 colleges intend to lead the assessments in August or September according to the updated rules given by the UGC, which orders that the assessments be necessarily led by September.