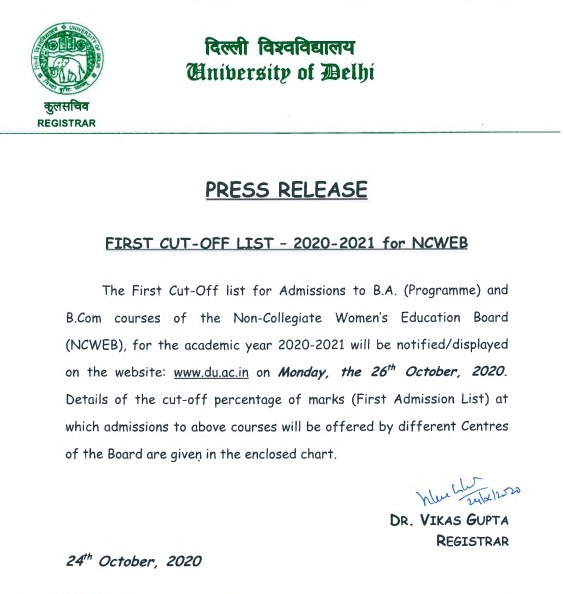 (Delhi University) has released the first cut-off list for BA B.Com Courses of Non-Collegiate Women’s Education Board, NCWEB. This can be seen on the official website of Delhi University – du.ac.in-. The cut-off for general category students in BCom course was 87 in Miranda College Hansraj College and 84 in Ramanujan College. The process of admission will start from October 26 and continue till October 28.

At the same time, DU has started releasing the third cutoff list. Currently, Zakir Hussain College has released its 3 cutoff list. According to this, chemistry has gone up to 99 percent in Botany, 92 percent. At the same time, admissions in Zoology courses have been stopped. Apart from these, other colleges including Hindu College, PGDAV College, Hansraj College, SRCC, LSR College, JMC, Aryabhatta, Ramjas, Miranda, Kirodimal College, Daulat Ram College will be released today.

OBC, SC, ST, EWS and PWD also have 82, 82,60,86 and 80 percent cutoff in both these colleges respectively. Under this cutoff, from 26 to 28 October, between 10 am and 5 pm will be at the concerned teaching center. It is to be known that after this, a large number of girl students of Delhi also applied to DU. Non-Collegiate Woman Education Board classes are conducted in 26 colleges of DU. These classes run on Saturdays in some centers and Sundays in some centers.

Number of Seats in NCWEB Colleges 2020